Africa Yoon Has Ideas About How to Juggle Work, Family, Health and Self

Korean culture seems to be everywhere right now, from Netflix’s Squid Game to the popularity of fermented foods like kimchi, to the most popular boy band in the world, BTS. But Africa Yoon, 43, has been on the Korean bandwagon long before it was #trending. In more ways than one, Yoon says it saved her. But in reality, she saved herself and she can credit her openness to all cultures for that.

Yoon, who was born Suzanne Engo, was the daughter of Cameroonians — a father who became the Cameroon Ambassador to the United Nations (where she picked up the nickname Africa) and an activist mother. She would follow in her mother’s footsteps and become involved in HIV/AIDS activism in Manhattan. Being part of the UN community, along with her parents’ insistence on appreciating and experiencing different cultures, especially their food and customs, was a strong influence in Yoon’s journey, which she shares in her new book The Korean: Single and Obese: Then Kimchi Changed Everything. In the book, she shares her journey from obesity to health; she delves into finding love; she touches on fighting for your health when no one will listen; she writes about a mother’s passion for her children; and of course, she talks about one of her great loves — Korean food and its health benefits. So, how does this woman — a mother, a wife, a TV producer and presenter, an author, an entrepreneur, an award-winning activist, and a cross-country runner (literally, across countries) find time for meditation, spirituality, and plenty of sleep? Here’s what we learned from this force of inspiration.

Sunday Edit: Let’s go back to when you were living in New York, not living your healthiest life.

Africa Yoon: I was about to turn 30. I was an activist working in Manhattan and worldwide when I found I had gained 120 pounds and was obese. It happened in five years. I started caring more for everyone else and not at all for myself. Zero self care is a dangerous path. But if you want to try it, eat everything, don’t sleep, don’t exercise and don’t do what you love. I thought I had to be an activist or diplomat, when I am an artist and very passionate about business. Not doing what I love led to obesity.

SE: What was the tipping point that made you change your ways?

AY: One afternoon at an Asian grocery store, H-Mart, a Korean grandmother called me fat! After the initial embarrassment of the public moment, we began an unusual friendship that led me to eat kimchi. My whole world changed after that. And I realized I needed a life beyond my work and began to dream about having a husband and children. To get that dream, I had to work on myself. So I started on the road toward the greatest cause of my career — to save myself.

SE: So the grandmother’s honesty was a good thing in the end…

AY: I knew enough about her culture to understand that a Korean elder will not give truth and love in a vanilla-coated candy. Korean elders are the same with their own children, which means she treated me like her own child. God sent her to reveal the truth to me. She wasn’t lying; I was fat. She wasn’t cruel; she helped me.

SE: And you began grocery shopping with her, learning recipes, and focusing on your wellness. And a year later you had lost 110 pounds. You met and married a Korean American man, had children, moved to Oahu, Hawaii, started the website blackyoonicorn.com. That’s a lot of change. Do you ever miss your previous life in Manhattan, where you lived from age six? 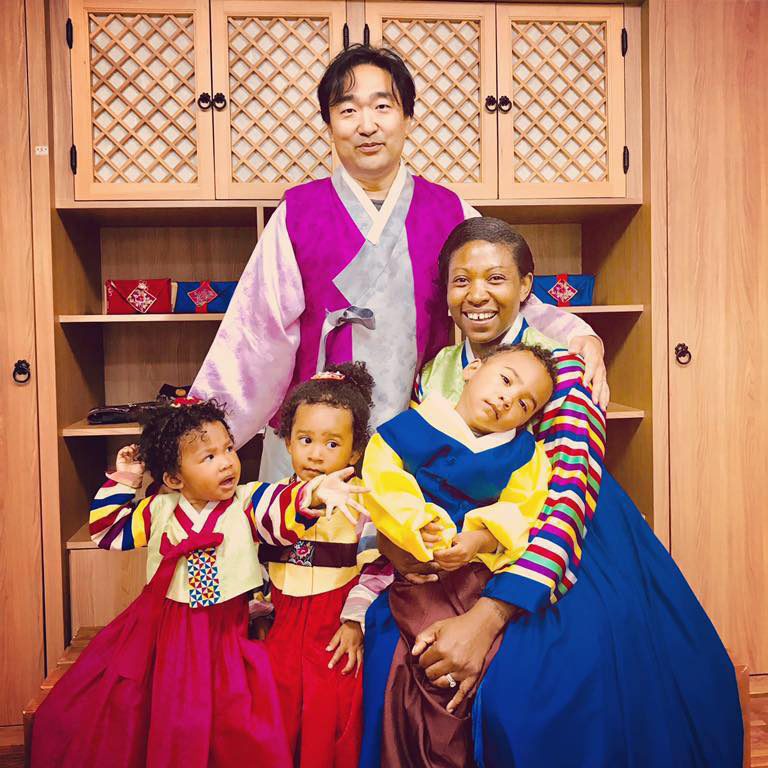 AY: I don’t, no. Manhattan is still there and I can always go visit.

SE: To say you’re busy is an understatement. What’s a typical day like?

AY: I wake up at about 4 a.m., pray, then practice transcendental meditation. Then I usually rest for a little while. Next, I check in on any interactions in Europe and Africa before they go to sleep. Following that, Asia. Then I go for a run around 6:00 or sleep more if I need it. When I’m back, I take care of my children’s breakfast and home school; sometimes after that, we head to the beach, where I work and my kids play before I join them to swim. Then lunch, dinner, bed (them at 6:00, me at 9:00). Sometimes none of that happens, and I am ok with it. But we always learn, sun and run, no matter what.

SE: How do you juggle it all? SE: What helped you return to a healthy weight and what advice do you have for those trying to get to a healthier weight?

AY: Sleep, pray, meditate, run, water, kimchi, create. Repeat. Consider a plant-based diet. Not totally vegan, but eat mainly from the earth and use food from another culture to add flavor to your life. Dive into another culture and see what their lifestyle can do for you. People don’t have to look like you to help transform you. For me, Korean food and spa culture led me to peace in my body. But I also learned from other cultures that are not my own, like Italian culture taught me to take life a bit slower; Indian taught me to quiet my mind; Japanese culture taught me to enjoy minimal empty spaces. If you are obese, it isn’t a summary of who you are, it is just how much you weigh. We are more than a body, so even out the attention to self, so that mind, body, and spirit are well for you to use your body for your dreams. It is about fitting into your dreams, not your jeans.

AY: There is no incorporating because my life is joyful all day. Because I have God in my life, good or bad, I am in joy, I enjoy. Being alive is pretty awesome.

AY: I run every day for one to two hours. Mostly one.

SE: And what about the major running you did — around Europe, Africa, and from New York to Chicago, which is a touching moment you recount in the book. You were running, on the one hand, to promote AIDS awareness, but also to thank Oprah Winfrey for inspiring you to take better care of yourself.

AY: I did. I ran from the United Nations to Oprah Winfrey’s studios. I ran exceptionally slowly — about 10 to 20 miles per day, so my body wasn’t shocked. It took almost all day, every day with body rest days, for approximately two months and two days.

SE: How do you mentally prepare for that kind of undertaking?

AY: My running advisor, Toby Tanser, trained me the Kenyan way, which means that you prepare by doing the race length regularly. So that when the challenge is upon you, it is normal. By the time I was running New York to Chicago, it was normal for me to run all day. Mentally, I was in the zone.

SE: Let’s switch gears to food. Kimchi is a big part of your life now. Tell us more about it.

AY: The first thing to know is that kimchi is a process, so there are hundreds of kinds of kimchi. The one you know is called baechu kimchi. Baechu in Korean means cabbage. That baechu kimchi, the most known globally, is one of many side dishes of Korean cuisine that they call banchan. If I told someone to try Korean food, I would say go out to eat it first. [Don’t try cooking it at home, in other words.] You will see that kimchi is something that is eaten with other things.

SE: What are some of the other stars of Korean cuisine, which we also might see on your Korean Cooking Friends Facebook page, which boasts more than 43,000 members?

AY: Try bulgogi. It means bul (fire) and gogi (meat). It is sweet and savory and perfection; it goes excellently with kimchi. Next, I would suggest a side dish called gyeran mari, a rolled egg. So, carrots and green onion are added to the egg, then the egg is beaten, cooked, and rolled up. Try mandu, the Korean word for dumplings. I mean, who doesn’t love a dumpling? I have a Korean cooking game called Korean Cooking Friends, where you can make Korean food, including gyeran mari, mandu, and kimchi. It’s for both children and adults and takes you through every single step.

SE: You often attribute your respect for other cultures to your parents. What would you say are the greatest things your parents taught you?

AY: I was very fortunate to have world leaders as parents. The biggest lesson was to consider what people have gone through and that it is part of the interaction when they meet you. The second thing is to remain respectful to elders. The third is that people who look the same don’t always have the same story; take people case by case. SE: And that seems to be a lot of the message in your book as well. Is that what you want readers to take away?

AY: What they will get is that embracing another culture can lead you to a wonderful life. Also, at any moment, you could meet a stranger who changes the trajectory of your life. And finally, I hope readers will take away that you should respect your elders.

SE: What’s next for you, career-wise?

AY: I would like to make a movie about my book. I hope the right partner would want to make a musical film, but they may have a better idea. Then my company, Blackyoonicorn, will begin to sell multicultural food toys.

SE: Always irons in the fire with you. What are you most proud of that you’ve accomplished?

AY: I am most proud when I am part of creating racial harmony.

Eating Disorders Are on the Rise in Kids: Here’s What You Need to Know

A Beginner’s Guide to Everything K-Pop