My Complicated Journey with Endometriosis and Adenomyosis

As women get older, more and more of them turn to egg freezing or other methods of fertility preservation to give themselves more time — an insurance plan of sorts. Research shows that by age 40, the chance of a woman naturally getting pregnant is around five percent.

But, I did in-vitro fertilization (IVF) when I was only 25.

I was facing a second surgery for stage IV endometriosis and adenomyosis and the surgeon mentioned that the disease and/or surgery could affect my ovaries and my future fertility. Doctors are notorious for not getting too personal, but he said to me: “If you were my daughter, I’d tell you to do it.”

My boyfriend (now husband) and I met with a few doctors to find the right fit until we fell in love with the team at Weill Cornell. We were originally only going to freeze my eggs, but then they explained that frozen embryos (which are fertilized with sperm) tend to have a better chance than frozen eggs alone. My boyfriend didn’t hesitate to say, “then let’s do embryos.”

So, we did. And I am so glad we did. Soon, we’ll be trying to put those embryos to good use – almost eight years later. 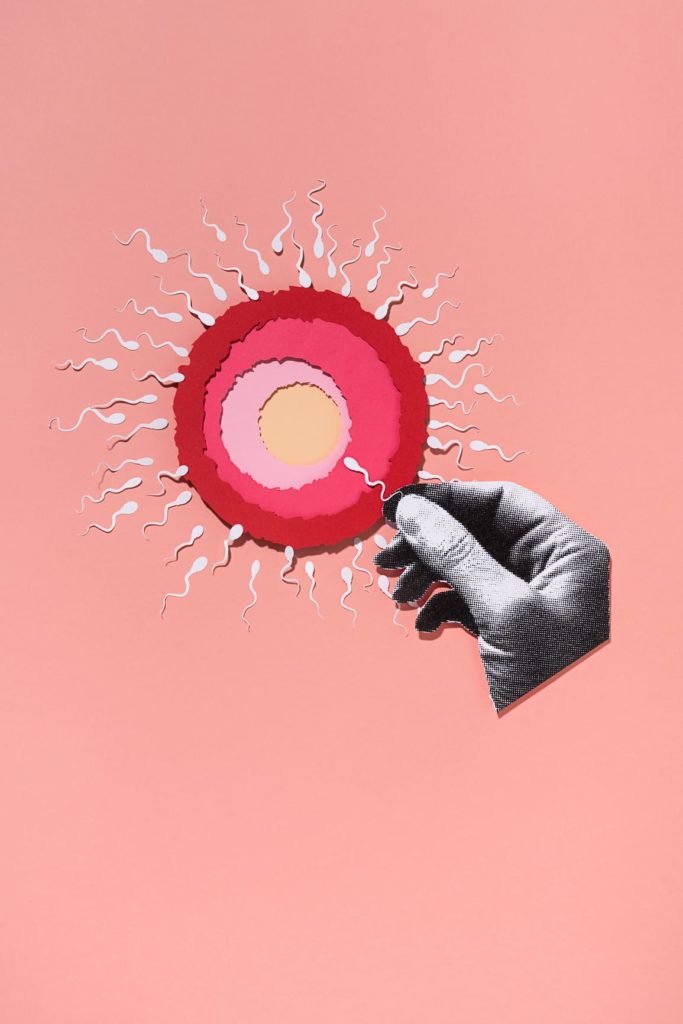 My journey with endometriosis began when I was 14. I was having debilitating pain in my pelvis, but I thought — and was told from experts — that I just had bad periods. Finally, one night I ended up in the ER where they found a cyst on my ovary that was twisted, and they were afraid it could rupture. So, after barely becoming a teenager, I started birth control to try to shrink it. I’ve now been on some type of hormone ever since to try to manage the issue and regulate the symptoms. I remember having to sit out from dance practice and competitions for a month or so. At the time, I was more concerned with missing dance than what was going on with my body. Little did I know, it was just the beginning of my saga with my reproductive health.

I’d continue to get debilitating pain flares that synced with my cycle. I’d have horrible back pain, GI symptoms, heavy bleeding, and other hormonal symptoms that I had been conditioned to think was just a “normal period.” It took almost ten years from that first ER visit, countless plans canceled, endless frustration, tears, self-doubt, lots of ibuprofen, more ER visits, heating pads, loneliness, and confusion to finally feel validated and heard.

Finally, I met with a specialist in NYC. After hormonal treatments, an MRI, ultrasounds, and an exploratory laparoscopy, the doctor came out and told my family he saw what he suspected: stage IV endometriosis. I had adhesions seemingly everywhere that caused my organs to stick together — my colon was stuck to my bladder, and my ovary to my rectum, among other odd pairings. This was the first of what would be three surgeries and a few more diagnoses. This is because an especially cruel part of endo is that it also has a “sister” disease: adenomyosis, which I discovered I also had.

Pretty much, it’s a regular ole’ party in my pelvis — but my uninvited guests have long overstayed their welcome.

So, since April is Adenomyosis Awareness Month, I wanted to share my story to help other women feel less alone in their diagnosis, along with some medical insight from one of my favorite experts (and my very own incredible doctor) Dr. Rony Elias, who specializes in Reproductive Endocrinology and Minimally Invasive Gynecologic Surgery at New York Presbyterian Weill Cornell Medical Center.

Endo and adeno, in a nutshell

For treatment, Elias says the same approaches are generally applicable to both and includes oral contraceptive pills, painkillers like ibuprofen and GnRH-agonist (gonadotropin-releasing hormones) or GnRH-antagonist (hormones that block the pituitary gland from making certain hormones.)

For endometriosis that doesn’t involve the uterus, surgery usually offers prolonged symptomatic relief while improving fertility rates, according to Elias. But for adenomyosis, the definitive treatment is a hysterectomy, but that’s not an option for patients who desire to carry future pregnancies. “There are, however, different types of surgeries that can be done to only remove the adenomyosis when it is localized to one or a few areas of the uterus. These are, however, quite invasive and very few surgeons around the world have the experience to do them.” Plus, he says, the improvement in fertility is debatable.

Unfortunately, there isn’t an exact known cause of either endometriosis or adenomyosis, but there are a few theories. The most accepted one is retrograde menstruation. “This is when the menstrual flow travels back through the fallopian tubes and implants in different areas of the pelvis and abdomen. Retrograde menstruation is believed to happen in most women, but why some clear the flow while others don’t, remains unknown,” says Elias.

Interestingly, there are no specific genes that are directly linked to endometriosis, but if a family member like a sister or mother has it, one is more likely to have it themselves.

How can these conditions affect fertility? Both of these conditions can affect fertility. Most commonly, “endometriosis can affect the fallopian tube function (also known as hydrosalpinx) as well as the ovarian reserve (egg number) and likely egg quality and embryo implantation,” says Elias.

Adenomyosis can affect fertility by affecting the wall of the uterus and therefore impacting embryo implantation. To improve fertility that may be affected by endo or adeno, the treatment is limited to surgery, and/or IVF.

What’s next for me

I consider myself very lucky as I was able to have a healthy, happy pregnancy with my daughter despite my conditions and without too many interventions. Prior to her, however, we suffered a devastating miscarriage. Because miscarriages are unfortunately common, I’ll never know “why” or “how.” But, of course, I can’t help but wonder or default to thinking it had something to do with my diagnoses.

Ultimately, I need to have a hysterectomy to remove my uterus which will remove the adenomyosis along with it – and that is a hard pill to swallow, but I have finally come to terms with it.  Until surgery, I constantly waffle between already mourning internal organs I never really cared about before while also anticipating feeling better and imagining being pain-free or at least in less pain.

Perhaps the only thing that allowed me to come to terms with it and accept it is having been blessed with my beautiful, bubbly 2.5-year-old daughter we were able to conceive via IUI (thank you, Dr. Elias). It worked on the first try for us. While it wasn’t the easiest journey, it was much less of a trial than I had anticipated, given my history. I had a healthy, happy pregnancy with her, and for that, I will forever be immensely grateful.

Until we feel ready and feel that our family is complete, my treatment plan with my doctors includes hormone replacements, pain management, physical therapy, acupuncture, and rest when needed. Because of the progression, my symptoms and the time that has lapsed in between having my daughter, when my doctors think I am ready, we’ll be transferring the embryos we created eight years ago to try for a second child. In doing so, we’ll be skipping the daunting injections and hormones that come along with an initial IVF cycle and that could further aggravate my pain and condition.

My husband and I are really looking forward to expanding our family, but we’ve also had extensive conversations and have also accepted that we are beyond blessed to have our girl, and if it is meant to be, it will be.

What I Learned About Breastfeeding After Having My First Child

For Those Born with a Cleft Lip, Minor Aesthetic Treatments Can Be Life-Changing