How to Remove an Unwanted Mole

Moles, sunspots, skin tags, beauty marks, birthmarks, freckles — many of us use these words interchangeably to describe small pigmented areas that pop up on our skin, but they don’t all have the same meaning. We had Robert Finney, M.D., a board-certified cosmetic dermatologist at Entière Dermatology, walk us through identifying a mole and the steps involved in getting one removed.

A mole, or congenital nevi, is a common type of birthmark. Birthmarks range from vascular types (like hemangiomas, which are reddish vascular birthmarks that happen during infancy) to pigmented birthmarks (like moles, Mongolian spots that are blue-ish spots on the lower back or butt that are often mistaken as bruises, and cafe-au-lait spots that are light brown and oval shaped). There are congenital moles, which are the ones that you’re born with. There are also common moles (a.k.a. acquired moles) that occur after both as well as atypical moles (aka dysplastic nevus) that are larger than a typical mole and sometimes have an unusual shape or various colors. Moles have a few distinguishing characteristics:

“Moles are small, round brown papules or bumps that can be various in size and don’t usually develop into cancer down the line,” says Finney. They can be raised or flat and might have hair follicles grow from them. They can apparel anywhere on your body — even under your nails and between your toes.

These clusters of pigmented cells (melanocytes) are usually harmless.

There’s a genetic disposition to moles: “Patients that are lighter skinned or have strong family history of skin cancer or funny moles are more likely to also develop them, but darker skin types less likely to develop as many acquired or congenital nevi,” says Finney.

Who do they affect?

“Your typical birthmark is not present at birth, but it presents thereafter — people are essentially prep-programmed to have them. Some moles pop up during puberty because those cells are always there and the androgens are just waiting to come out during puberty. You usually see moles stop occurring around the age of 30, but there aren’t hard and fast rules,” says Finney.

Sudden changes to your moles can be an indication of melanoma — a dangerous type of skin cancer. “A biopsy would rule out melanoma or skin cancer if your mole changes in appearance,” says Finney.

How to Remove a Mole

Despite all the benefits of social media, there’s a lot of bad advice out there — and the trend of DIY mole removal at home is certainly one of them. “People have given themselves horrible scars as a result of attempting an at-home mole removal. It’s never a good idea,” says Finney. And before you immediately resort to getting moles removed, consider embracing them: “I always try to tell patients it’s just their signature mark. Unless it’s a mole that’s really large or sticking out in an intrusive way, there’s a risk to every procedure. So, I encourage patients not to worry about little moles as they don’t pose a health concern,” says Finney. 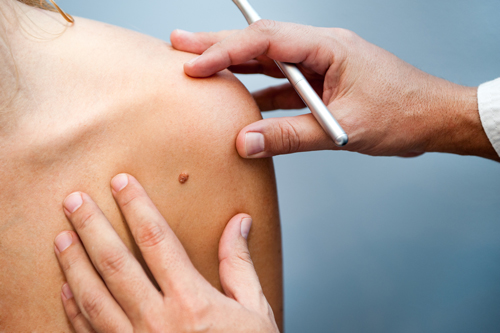 However, if you opt to get them removed for cosmetic reasons, you can have them fully excised or shaved off by a dermatologist. “The good news is that there’s no prep involved for the patient. Most doctors can accommodate a removal the same day because it takes a few seconds. The only uncomfortable part of the process for the patient will be numbing the area with a bit of lidocaine,” says Finney. With an excision, your doctor will use a scalpel to cut out the entire mole in addition to a bit of the healthy skin around it before stitching it. With shaving, you usually won’t need a stitch. Your dermatologist will help guide the best choice for your situation. Either way, a biopsy of the mole will be completed.

How to Cover a Mole

If you want to lessen the appearance of a mole, a full-coverage concealer (like Dermaflage Concealer Cream, which was specifically designed to cover scars and tattoos on Hollywood sets) should do the trick under your foundation. Particularly for raised moles, you want to blend very well to make sure you’re getting all the nooks. Some people opt to tattoo over their moles to disguise them, but that could be a slippery slope as it will make it more difficult to track any changes in the mole should it be (or become) malignant. “Hyperpigmentation creams won’t work on a mole to reduce its coloring or appearance. It’s not like your melanocytes are just overactive. The cells are deeper,” says Finney.

Recovering from getting a mole removed isn’t too different from trying to protect a general cut or scrap. “You clean it, lather it with a little Vaseline, and cover it with a bandage until it heals,” says Finney. The full recovery period depends on the size of the mole. “It’s a really large mole, it’s obviously going to take longer. But for small birthmarks, it typically takes anywhere from 5 to 10 days of keeping it covered,” he says. 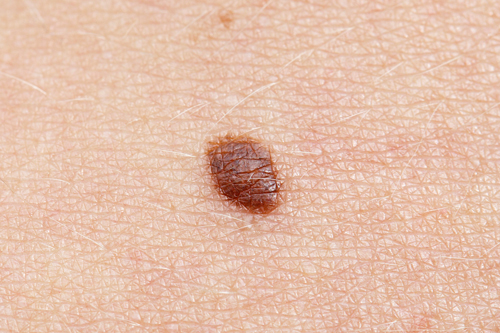 If a regular mole is surgically excised, it shouldn’t grow back. Patients might see regrowth down the line if some cells deep in the skin were left behind from the procedure. In that case, it doesn’t mean it’s an indication of melanoma, but make sure to chat with your dermatologist if you have concerns — and don’t forget your yearly skin checks!

What Are Freckles Really, Anyway?

How to Deal With Uneven Skin Tone and Sunspots

12 Signs You Are in a Toxic Relationship With Your Skin

Do I Need to Be Worried About This Skin Tag?