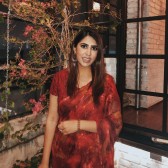 Periods are no longer taboo — especially when it comes to speaking about them. In this day and age, everyone around me seems to be so vocal and open about their menstrual cycle. And while I know that I am in the unique position of working in a primarily female office that finds no topic off limits, I often reflect on the days where I dared not utter the words, “I’m on my period,” to anyone. Insert cringe-worthy middle school flashbacks featuring blood-stained light wash jeans and jackets tied around the waist. What was once hushed whispers behind closed doors evolved into casual dinner table conversation. “Can you pass the salt? Also, what are your thoughts on menstrual cups?”

There are a few standout events that come to mind when thinking about the intentional desensitization that has taken place these past few years. In 2015, poet Rupi Kaur made headlines when Instagram took down her menstruation-themed photo series. In 2018, THINX released a period sex blanket to dismantle another social stigma about menstruation. Plan International UK, a development charity for girls, pitched a period blood emoji that got approved by Apple in February of 2019 — the same month when a documentary about menstruation, Period. End of Sentence., won Best Documentary Short at the Oscars. These people changed the conversation and destigmatized a shared-experience that affects around half the population.

But there is so much to be said about women and their periods. How are we to encapsulate the many issues surrounding something that is so uniquely personal to each individual woman?

How we choose to care for our bodies during this time is also unique, and with an influx of options — tampons, pads, menstrual cups, period underwear, etc. — it can get overwhelming. As someone who does not leave their comfort zone unless physically pushed out, I appreciate tampons for their simplicity. But I do not appreciate the harmful chemicals that can be found in most tampons.

thank you @instagram for providing me with the exact response my work was created to critique. you deleted a photo of a woman who is fully covered and menstruating stating that it goes against community guidelines when your guidelines outline that it is nothing but acceptable. the girl is fully clothed. the photo is mine. it is not attacking a certain group. nor is it spam. and because it does not break those guidelines i will repost it again. i will not apologize for not feeding the ego and pride of misogynist society that will have my body in an underwear but not be okay with a small leak. when your pages are filled with countless photos/accounts where women (so many who are underage) are objectified. pornified. and treated less than human. thank you. ⠀⠀⠀⠀⠀⠀ ⠀ ⠀⠀⠀⠀ ⠀⠀⠀⠀ ⠀ ⠀⠀⠀ ⠀ this image is a part of my photoseries project for my visual rhetoric course. you can view the full series at rupikaur.com the photos were shot by myself and @prabhkaur1 ⠀⠀⠀⠀⠀⠀ ⠀ ⠀⠀⠀⠀ ⠀⠀⠀⠀ ⠀ i bleed each month to help make humankind a possibility. my womb is home to the divine. a source of life for our species. whether i choose to create or not. but very few times it is seen that way. in older civilizations this blood was considered holy. in some it still is. but a majority of people. societies. and communities shun this natural process. some are more comfortable with the pornification of women. the sexualization of women. the violence and degradation of women than this. they cannot be bothered to express their disgust about all that. but will be angered and bothered by this. we menstruate and they see it as dirty. attention seeking. sick. a burden. as if this process is less natural than breathing. as if it is not a bridge between this universe and the last. as if this process is not love. labour. life. selfless and strikingly beautiful.

So, I did my research and discovered Athena Club — co-founded by Maria Markina, who made Forbes 30 Under 30 in 2018. The tampon subscription service provides high-grade tampons at a fraction of the cost. Rather than reinventing the wheel, Athena Club took the wheel and spun us 100 percent organic cotton.

“The main ingredient in [our] organic tampons is 100 percent organic cotton,” she says. “A lot of people think ‘I’m going to buy cotton tampons, it is healthier,’ but you don’t realize that it contains a lot more chemicals than any other tampon. Ours are chemical-free, non-pesticide, [and] 100 percent organic,” says Markina.

There are currently two options on the website: premium tampons for $6.50/bag and organic tampons for $7.50/bag. Both tampons are free of harsh toxins and chemicals, which is something Markina (along with co-founder Allie Griswold) insured when partnering with their manufacturer. The main difference between organic and premium tampons is that premium tampons are a blend of cotton and rayon. “Rayon is a plant-based ingredient … and is actually a very absorbent ingredient, which is why it is used in tampons,” Markina says. “The tampon itself is a little bit smaller, but it doesn’t have any of the really bad toxins that you could see in other tampons, like predominantly chlorine or weird plastics weaved into the tampon.”

In addition to making feminine care accessible and affordable, the ladies at Athena Club run a top-notch donation program. “To date, we have donated over 20,000 tampons to women in need. We partner with organizations locally and internationally to donate to either homeless shelters here in the U.S. We’ve donated mainly to the New York area — even in the New York area there are a lot of women who definitely need feminine care — or to women in other countries across the world who just don’t have access to products,” says Markina.

And for every new customer you bring in, you get a free bag of tampons — which you can choose to donate to women in need. “We’ve been getting quite a lot of donations, which is amazing for the customers but also just as a company. That is something we really care about. We don’t advertise it very much,” she says. “I don’t want it to be a sales point because that’s really not what this is about.”

Cellulite is Normal, So Let’s Start Acting Like It

CBD for PMS? A Gynecologist Tells Us What’s Up

The New Rules for Dating with an Age Gap