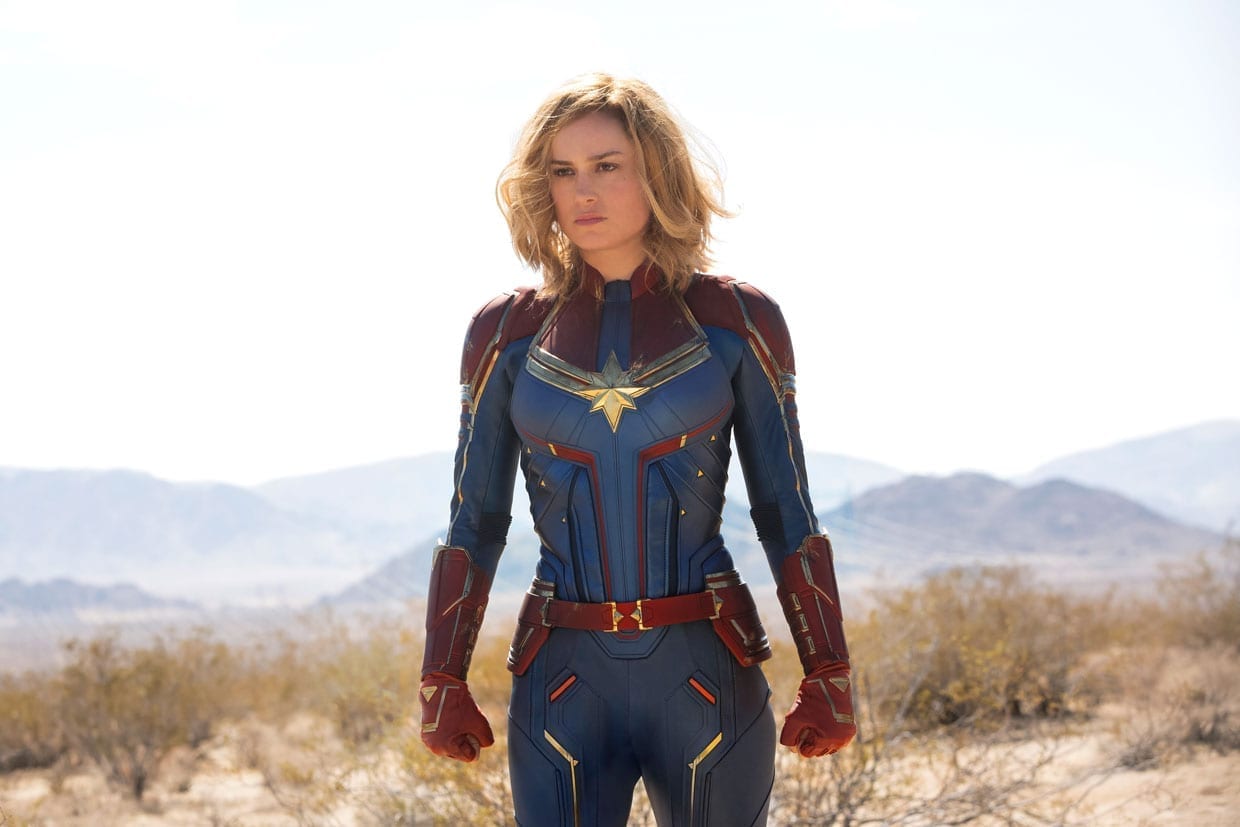 Captain Marvel is all over the place.

Not the movie — the character. And that is a glorious, wonderful thing.

When I was growing up in the ‘70s and ‘80s, there was not much representation of super-powered ladies on any screen. In 1984, I went to the movies to see Helen Slater as Supergirl, and a few years before that, Lynda Carter starred in a Wonder Woman TV series. For years, on screens large and small, that was about it (aside from 1995’s “Tank Girl,” the rare comic-book movie directed by a woman).

Every so often, there would be a female-led superhero movie. We all try to forget “Elektra” and “Catwoman,” but they exist. The fact that those movies tanked was often blamed on the idea that audiences did not want to see women wearing the super-tights. What about the more likely explanation: That audiences did not want to spend their hard-earned cash on bad, boring blockbusters? Nobody in the entertainment industry seemed too interested in that theory, so female-led comic book movies went from “rare” to non-existent for a while.

So comic fans everywhere — many of them women who have felt they had to make themselves smaller and quieter to be accepted — rejoiced when award-winning writer Kelly Sue DeConnick began presiding over the Carol-centric comic “Captain Marvel” in 2012. There have been many versions of Captain Marvel over the years: Carol Danvers, the protagonist of the upcoming Marvel feature film, has been one of a string of comic book characters to take on that title. Even when the Marvel comics spent time on Danvers’ quests, various elements of Carol’s personality came to the fore depending on who was steering the narrative ship and what battles were being fought by Carol, whose powers are derived from an explosive encounter with alien DNA. Carol has even taken on different names — including Binary and Warbird — that allowed her to embrace or explore various aspects of her complicated identity.

But from the first page, it was obvious that DeConnick — who grew up on Air Force bases — loved depicting the many facets of a passionate, intelligent and flawed woman with big ambitions and a bigger heart. To DeConnick and the artists she worked with, the fact that Carol had a lot of modes and layers was a feature, not a bug.

What I want more than anything is … to see an array of female superheroes that positively saturates pop culture.

The comic-book Carol of the past decade is not a collection of powers and traits: She is a hopeful, kind, headstrong woman who is in love with flight, who cares fiercely for her friends and who sometimes is not sure of her place in the universe. She is super, and she is human.

One of my hopes for “Captain Marvel” is that star Brie Larson’s version of the character will get to make mistakes and run into obstacles she can’t punch away. I have no doubt her Carol will experience setbacks — there wouldn’t be a movie without them — but I want her to be able to display the full range of colors that an ambitious, curious woman can experience in a given day: happiness, excitement, worry, insecurity and a strong desire to punch things, whether or not it will help.

But what I want more than anything is for Carol Danvers to have company — all that complexity, that vital array of cultural and social contexts, histories and goals. I want to see all of that reflected and amplified by an array of female superheroes that positively saturate pop culture.

Yes, we have gotten one “Wonder Woman” movie and another installment is coming next year, and like “Captain Marvel,” it will be a retro jaunt. Carol’s big-screen debut is set in 1995 and the next “Wonder Woman” film takes place in 1984. (Obviously, I am dying to see Chris Pine in a Members Only jacket.)

But it is well past time to bring comic-book movies into the present, and get out of the “Highlander” era of the genre. An explanation: For a long time, I was unconsciously trained to think about female superheroes on screen by way of that famous line from “Highlander:” “There can only be one.”

Growing up, as we saw, the options were limited. In the last decade or so, TV was there to pick up a bit of the slack with Marvel’s “Jessica Jones,” Marvel’s “Agents of SHIELD,” DC’s “Legends of Tomorrow” and Marvel’s “Cloak & Dagger,” among other comic book-derived shows (“Legends,” in particular, is a delightfully demented gem). But those TV programs (one of which is already canceled) do not have the marketing budgets or the name recognition to make huge dents in the public consciousness.

Then came “Wonder Woman,” which was like water in the desert. Every time I watch the movie, I cry at the famous “No Man’s Land” scene. Up until that point, everyone around Diana has questioned her and told her what she can and can’t do. It is incredibly cathartic when Diana shrugs off all warnings and doubts and charges into No Man’s Land. Head down, shield up, she takes an incredible amount of punishment as she makes her way across a battlefield to save civilians. Is it possible to watch that moment and not cry?

That moment did not just connect with me, it took me back to being 12 years old, watching “Wonder Woman” on TV and pretending to flick away bullets with gold bracelets from my mom’s jewelry box. What if I could be that powerful? What if I could be that brave? Couldn’t we all have used more Dianas to prepare us for the often unforgiving world we would face as women? The answer is yes. But I have more questions.

Where’s my Monica Rambeau movie? In the comics, Monica (also known as Photon, Pulsar and Spectrum) took on the mantle Captain Marvel before Carol did. Monica has been an Avenger — the first African-American woman to be part of that cool-kid posse. She should be starring in her own films, as should Wasp, aka Janet van Dyne (played by Evangeline Lilly on the big screen), Valkyrie (Tessa Thompson) and of course, Scarlett Johansson’s Black Widow, who for years was the token woman who got more than five lines in Marvel Cinematic Universe films.

And how about Storm, aka Ororo Munroe? In this time of global climate change, audiences would likely flock to a film chronicling Storm’s reaction to decades of humans screwing up the weather.

There are so many more non-dude comic-book characters who deserve so much more screen time from TV and film (Hayley Atwell as Peggy Carter — on TV and film — is my everything). But I will throw out just one other name: Ms. Marvel, the protagonist of a delightful comic of the same name. Just last month, “Spider-Man: Into the Spider-Verse” won an Oscar, and the audience that flocked to that movie would probably do the same for a saga centered on the current Ms. Marvel: Kamala Khan, a young Pakistani-American woman from Jersey City. On big and small screens, I want to see all these characters punching bad guys, outsmarting villains and saving the day. I want these women to disagree with each other, to experience epiphanies, to form alliances and friendships, all while having a blast. Women who are all just as complex and variable as Carol Danvers or Monica Rambeau. Women who are black, indigenous, Latinx, Asian, queer, non-binary and trans, and who come in all shapes and sizes.

When that blessed day comes — the day that proves that Hollywood is truly interested in all of us, in all our complexity — here is how you will be able to tell: A female-led superhero movie will flop — and they will not stop making them for a decade. We will have ditched the “Highlander” rule forever.