Understanding Vitiligo: How It Starts and What to Do About It

It’s estimated that about one percent of the U.S. population has vitiligo (pronounced vit-uh-LIE-go), which “is an autoimmune, genetic disorder of the skin that leads to loss of skin pigment,” says Ramya Kollipara, MD, a board-certified dermatologist at Westlake Dermatology. “It is caused by the immune system attacking melanocytes, which are the pigment-making cells in our skin. The loss of melanocytes leads to the loss of pigment in the skin,” she says. It often starts off as a smooth, small white spot that’s followed by more over time.

“Vitiligo presents itself as milky white areas on the skin. It can affect any parts of the body, but usual areas that it can occur in are the hands, feet, face, eyelids, and around the lips,” says Kollipara. There are several subtypes of vitiligo, the most common being Generalized, where the spots appear in different places on your body. “Typically, vitiligo starts developing before the age of 30,” she says, but it can happen at any age. “Vitiligo is equally common in males and females and does not have any ethnic or racial predilection.” 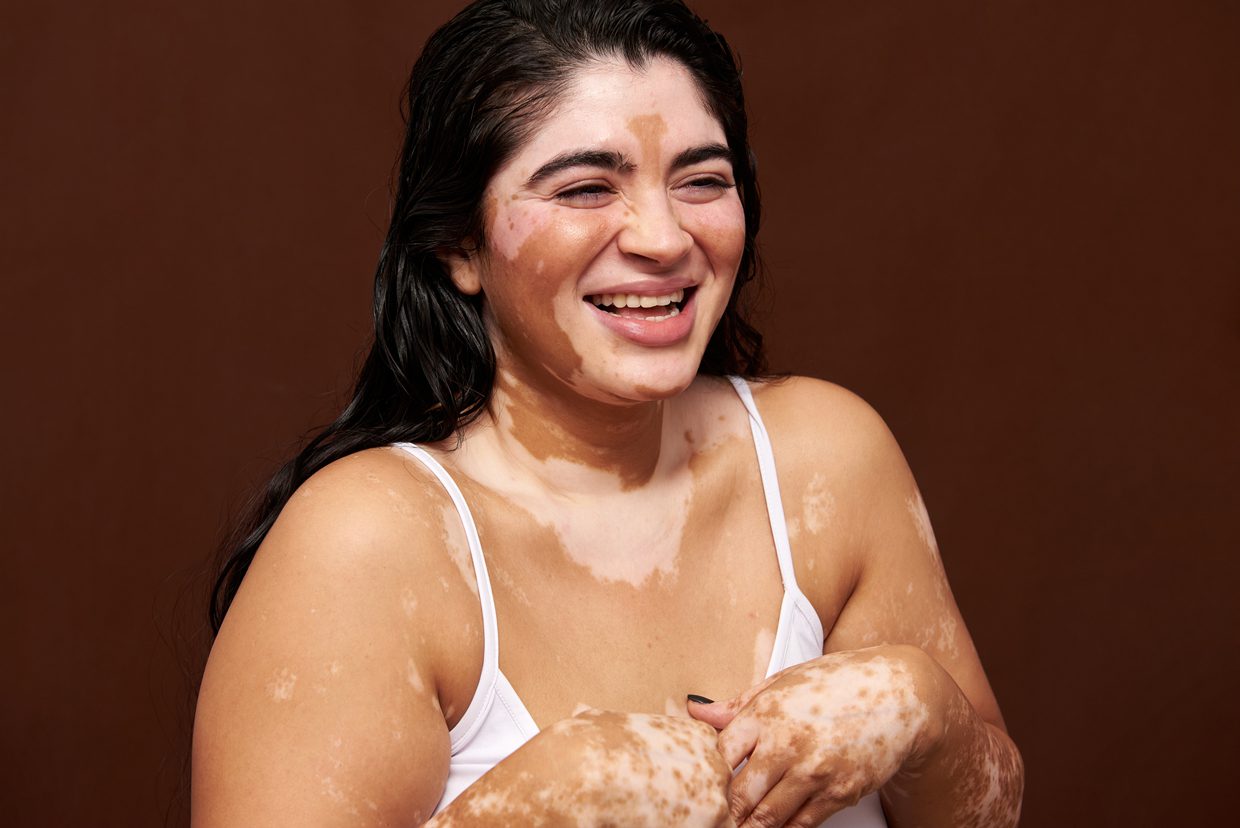 If you decide to get it treated, “there are several options available including topical and oral medications to decrease the immune-mediated destruction of the pigment making cells — a.k.a. melanocytes, light therapy to prevent the destruction of melanocytes and to stimulate growth factors, and surgical treatments such as melanocyte transplantation where normal skin from elsewhere on the body is transplanted to the affected area to promote repigmentation,” says Kollipara. Now, there are also new medical advancements in treating vitiligo, including an FDA-approved topical cream called Ruxolitinib that’s the first of its kind to repigment white patches after participants in studies used it for half a year.

But, the debate for those with vitiligo is whether they treat it — or embrace it.

Ramya Kollipara is MD, a board-certified dermatologist at Westlake Dermatology.

It’s not contiguous, nor is it fatal, and research shows it doesn’t increase your risk of skin cancer. However, “it can have a significant impact on quality of life because of the appearance and contrast between normal skin and skin with pigment loss,” says Kollipara. The popular condition is known for burdening the late Michael Jackson, who made a point to use makeup to cover up his skin completely and painstakingly bleached his skin so that he appeared to look white, though he was born with darker skin. (Ed note: It’s important to avoid bleaching to avoid mercury poisoning.) “Although there are many treatment options, which are best done earlier in the course if that’s the option you decide on with your dermatologist, I don’t think vitiligo is necessarily something that needs to be treated,” says Kollipara.

It’s very important to also chat with your derm about the best skincare routine to help you manage your vitiligo. Ingredients like retinol (vitamin A), vitamin C, peptides, and folic acid help even out pigmentation, if that’s your goal. Your derm might also prescribe a topical steroid to help with inflammation. A broad-spectrum SPF is particularly important if you have vitiligo, as the loss of pigment makes your skin more susceptible to UV damage and sunburn. The good news is that you can generally use the same products that someone without vitiligo can use, but be mindful of ones with lightening properties — this is where your dermatologist steps in to tailor your products to your routine.

“There are some wonderful support groups available if you’re looking for a like-minded community, such as Vitiligo Friends and Vitiligo Support Internationality, that connects those with vitiligo and do great advocacy in increasing awareness of vitiligo,” says Kollipara.

A new generation of celebrities, including Canadian model Winnie Harlow, sees the disease as a unique difference that makes them special and sets them apart from the pack. Harlow frequently takes to social media to show her vitiligo pride: “I’m not a vitiligo sufferer. If anything, I’m succeeding at showing people that their differences don’t make them who they are,” she said in one post.

For those who are looking to understand vitiligo better or find a community, fill your feed with these inspirational accounts, in addition to Harlow:

Another Canadian beauty, the speaker, and model is also the founder of the nonprofit Born to Rise, a community (and a live, annual event) that gives people of all backgrounds and walks of life an opportunity to share their unique stories.

The painter illustrates digitized watercolor portraits of vitiligo-affected followers who submit their selfies. And, in their own words, they get to retell their relatable stories to her destigmatize vitiligo.

The beauty influencer shares her tips on how to be confident in your own skin. Hint: Sunscreen is a must!

The influencer (going strong with 786K followers on TikTok) is known for her honest take on the difficulties of living with vitiligo and educating people about the condition.

How to Deal With Uneven Skin Tone and Sunspots

10 Steps For Your Healthiest Skin Yet

10 Acne Scar Treatments That Will Change Your Skincare Game