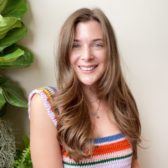 Thanks to the amount of time spent in front of our screens and devices, most of us are exposed to a known tech enemy called blue light. But, as it turns out, blue light is not just haunting us artificially from our smartphones, tablets, and computer screens — it finds us naturally through the sun’s rays, too. Although it is hard to avoid, there are a few ways to lessen exposure to blue light, starting with blue light-blocking glasses.

Up ahead, we breakdown blue light, its impact on our eyes and overall health, how to protect against its wrath, and whether the blue light-blocking glasses trend is actually worth it.

What is blue light?

To understand blue light, Gary Heiting, OD and Eyesafe Vision Health advisory member, says we must first think about visible light. “Visible light is the energy that can be perceived by our eyes and translated into visual images in the brain,” he explains. “Natural sunlight — and artificial light, too — is made up of a spectrum of this visible light energy, and each component of the spectrum has a different color. When combined together, the individual colors of visible light disappear and our eyes perceive the combination as white light,” he adds.

Exposure to blue light… before bedtime can disrupt the natural, internal process that regulates our sleep/wake cycle.

According to Heiting, blue light is “the portion of the visible light spectrum that, if isolated from all other components of visible light, appears blue.” And, while UV light is a common bad guy when it comes to light, blue light has only “slightly less energy than ultraviolet radiation, which is invisible,” says Heiting.

Because it is part of visible light, blue light is found naturally in sunlight and in artificial lighting. However, it is also emitted by the screens of desktop computers, laptops, and smartphones.

How Blue Light Impacts the Eyes and Overall Health

Although concerns about blue light’s effect on the eyes are valid, Heiting says “the health effects of long-term exposure to blue light have not yet been clearly established. And laboratory and animal studies have demonstrated that the energy contained in blue light — in sufficient intensity and duration — is capable of damaging tissues of the eye.” However, because its energy level is comparable to UV radiation, there are concerns, as “exposure to just slightly more powerful UV rays has been associated with a number of health problems, including cataracts and age-related macular degeneration (AMD),” says Heiting. With that said, human interaction with blue light — through electronic devices — is not nearly as strong as the blue light used in lab studies.

When it comes to blue light, eye health is not the only concern. In fact, Heiting says one danger of blue light is already known. “Exposure to blue light from electronic devices used in the evening before bedtime can disrupt the natural, internal process [called the circadian rhythm] that regulates our sleep/wake cycle,” explains Heiting. “This represents a significant public health threat because research has documented that sleep disruption and poor sleep quality is associated with multiple health problems, including high blood pressure, high cholesterol, cardiovascular disease, weight gain, increased inflammation, and emotional distress and mood disorders,” he adds. Heiting also recommends using Apple’s night shift to “reduce the amount of blue light emitted by screens at specific times of day (usually after sunset) that can be adjusted by the user” and looking for devices “with blue light protection built into the screen technology, rather than relying on display software solutions.” The benefit to computers and devices with blue light blockers built into the screen technology is that it typically does not impact the color accuracy of the screen (whereas night shift gives the screen a yellow hue).

Most of us spend our days overexposed to blue light while staring at a computer screen for more than eight hours. Heiting recommends the 20-20-20 rule. “Every 20 minutes, look away from your screen and give your eyes a break by looking out a window or at something at least 20 feet away for at least 20 seconds,” he explains. “These frequent, short breaks reduce focusing stress and eye muscle fatigue that frequently contribute to eye strain,” he adds, noting that you should “blink your eyes frequently and fully to remoisten them” during these quick breaks and apply artificial tears if necessary.

And unplug two hours before bed. Since blue light is known to wreak havoc on circadian rhythm, Heiting says it is vital that we unplug our devices before bed — that means no falling asleep to the TV, too. “Using your device right up to bedtime increases your chances of a restless night of poor sleep,” he explains. “Eventually, this can lead to serious health problems,” he adds. Instead of watching TV or scrolling through social media, Heiting recommends picking up a book — an actual book, not a tablet — or magazine and reading before hitting the hay. “Make sure your reading light has a warm-white bulb (color temperature 2700K-3000K), which emits less blue light than other light sources.”

Why Mindless Scrolling Affects Your Gut