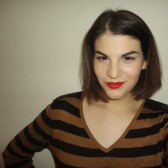 When all eyes are on you, it is hard not to carefully consider your beauty routine. But for a lot of stage performers, makeup is about more than just looking put-together; it is a part of their artistry. When a singer gets on stage, it is their time to express themselves, both visually and through their music. Some opt for an elevated version of their everyday look; others pack on the drama with glitter and color. Some view makeup as a ritual; others as a chance to play.

Whatever the method, it all ties into who they are as an artist, and inevitably informs their performance. I chatted with five female musicians who all use beauty as a means to express themselves and their music. Their makeup looks inform their artistry, and vice versa, which makes what they do that much more interesting. Read on to get the low-down on the inspiration behind these musicians’ stage looks, their pre-show routines, and what makes them feel the most beautiful.

Cyn is a pop singer-songwriter originally from Detroit, Michigan. The musician’s airy vocals and vintage aesthetic bring an unprecedented charm to pop music. In 2017, Katy Perry took notice and signed Cyn to her record label, Unsub Records. Cyn’s debut EP Mood Swing is out now, and her new song, “Drinks,” is the lead single on the soundtrack for Promising Young Woman.

What is your go-to beauty/makeup look for performing?

My look for performing changes depending on how I feel that day and what the general vibe of the venue is. More often than not, when I go to get ready for a show, I hear my high school choir director telling me to put more makeup on. “Pretend it’s prom,” she always used to say. So I think I’ve been brought up to exaggerate my look on stage because, as they say, that is where one is meant to look larger than life.

Walk us through your pre-show skincare/makeup routine.

I start by washing my face with the Glossier Milky Jelly Cleanser and applying Glossier Priming Moisturizer Rich as a primer. Next, I do my base routine, which is Chanel Ultra Le Teint in the shade “BD01” and Urban Decay Stay Naked Correcting Concealer in the shade “10NN.” I try to keep it “exaggerated, Parisian chic,” which to me, means a little more attention on the eyes. I add some eyeliner (Maybelline Line Stiletto Liquid Eyeliner in Black) and exaggerate lashes (Glossier Lash Slick), brightening the cheeks a bit more than what is natural (either Glossier Cloud Paint in “Storm” or “Dusk” or a Chanel blush [in] “Rouge Profound” or “Pink Explosion”), which I find to be very pigmented. Finally, I add a statement lip (Chanel Rouge Coco Flash in “Amour” or Chanel Rouge Allure Velvet in “Abstrait”). When I’m offstage, I keep it more simple.

out now only on IGTV (check my highlights for link 💫) 🎥 @hi_im_dan

What is the inspiration behind your stage looks?

As I plan my stage looks for upcoming shows, I like to let the music influence me. My EP, “Mood Swing,” has a lot of imagery within the lyrics. I like to let those scenes and feelings direct the stage look. I often say, if it works in a rom-com, it works for me.

What makes you feel the most beautiful onstage?

I feel most beautiful on stage when I can feel myself and the audience sharing the moment.

If I’m sleeping on a tour bus, I will always wash off my makeup with the Glossier Milky Jelly Cleanser after a show. If I’m staying in a hotel, I let the night decide.

Is Screen Time Impacting Your Skin?

How to Tell If Your Sunscreen Is Expired