It has never been this easy to decide on a costume and make-up for Halloween thanks to Doniella Davy, the head makeup artist for Euphoria, the HBO series. Not only can literally every makeup look from the show serve as an example for makeup artists in neighboring Sephoras, but one of the episodes of the series was also dedicated to Halloween. We asked Doniella about her high school drama, first dates and makeup, of course.

Q: Did you expect that the makeup in Euphoria would get so much attention? How do you feel now that you can see your influence on the runways and IG?

Doniella Davy: As someone who is not at all connected to the fashion world, I didn’t even know it was NYFW until several fans of the Euphoria makeup DMed me some makeup pics from the Cynthia Rowley and Anna Sui show. My jaw dropped because some of the looks were nearly exact replications of Jules’ looks! I’m a film and TV makeup artist. I work on location, and it is NOT glamorous. When I learned of Euphoria’s impact at NYFW, I was sitting in a camp chair, on location in a swampy forest in Georgia, sweating and being eaten by mosquitos, so it was a real oxymoronic moment for me. I was like “WTF, really?” I never expected the Euphoria makeup to land how it has, so I’m just really thrilled that people, from shy 14-year-olds who are just starting to explore their self-expression, to acclaimed fashion makeup artists, are appreciating and emulating it.

Q: Do you remember your makeup in high school? Did you experiment with it?

DD: I experimented just a little bit with a more alternative look in middle school and got shot down for it. From then on out I kept it very safe and focused on trying to look pretty. Now, I’m 31 and I’m mostly over that, but I’m still in the process of unlearning the beauty norms that were passed down to me from society starting at a very young age. Working on Euphoria has completely reignited the realization that beauty and makeup rules are meant to be broken, and I want to help people break them. 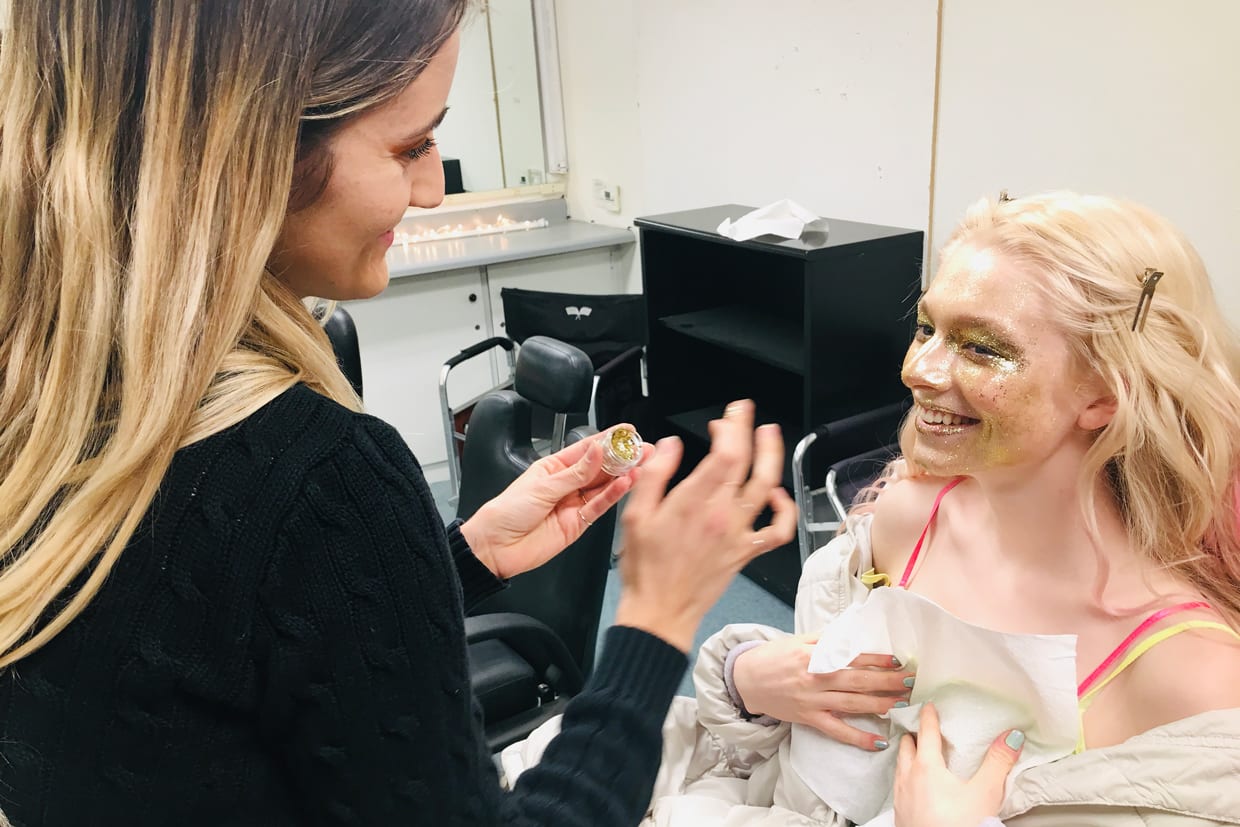 Q: How do you create your mood boards?

DD: Most of my inspiration for the Euphoria makeup came from what Gen Z is posting on their Instagrams, so it’s directly related to real teenagers right now. The makeup they, Gen Z, are doing is influenced by millions of unique sources that I don’t even necessarily know about, so the Euphoria makeup, like all forms of art, is made up of endless and cumulative cultural influences that have come before me. I gathered up everything I was seeing on Instagram and also in fashion, and focused on one character at a time as I chose images to put on that respective mood board. I took their costumes into consideration and chose makeup color themes that would function in tandem with their costumes. The mood boards functioned like a menu of looks and a jumping-off point for improvisational and collaborative makeup to occur between myself and the actresses.

Q: Who is your favorite character in the show?

Q: What was the most emotional episode you worked on? What about when you watched the series?

DD: The majority of our filming days were extremely emotional. I cried on set many times. I cried while watching the show many times. The most emotional scenes to shoot and watch were the final scene of Episode 8, which was Rue’s surreal dance number, Cassie’s abortion scene where she has the fantasy of herself ice skating, and the various scenes where Rue and her mom were fighting.

Q: In your opinion, how are Gen Z kids different from millennials?

DD: The spirit of Gen Z, as I see it, is to challenge and to overcome what has become normalized in our society — especially the normalized beauty and gender standards that have had a continued detrimental impact on society, you know? The ones that say a woman or a man ought to look or be a certain way. Gen Z is an amazing example of brave humans who are pushing forward un-compromised, but peaceful self-expression. I think Millennials helped pave the way for this, just like the generations before us helped pave our way.

Q: If you could, what advice would you give to your 16-year-old self?

DD: Oh, this is a great question, and I have so much to say to my younger self! The pressures that you’re experiencing, the ones that tell you that you can’t be that and you have to be this, are wrong. Run, don’t walk, in the opposite direction. The idea that your self-worth is measured by feeling accepted or attractive to the opposite sex will not serve you in your life. It will only give you temporary satisfaction. Find something meaningful to care about instead. Makeup is a great way to rebel against the antiquated beauty and gender norms that we have inherited, so experiment with that! You have nothing to lose, and everything to gain. Haters gonna hate because they’re in pain. But that doesn’t have to be your pain.

Q: What is the perfect makeup style for a first date? 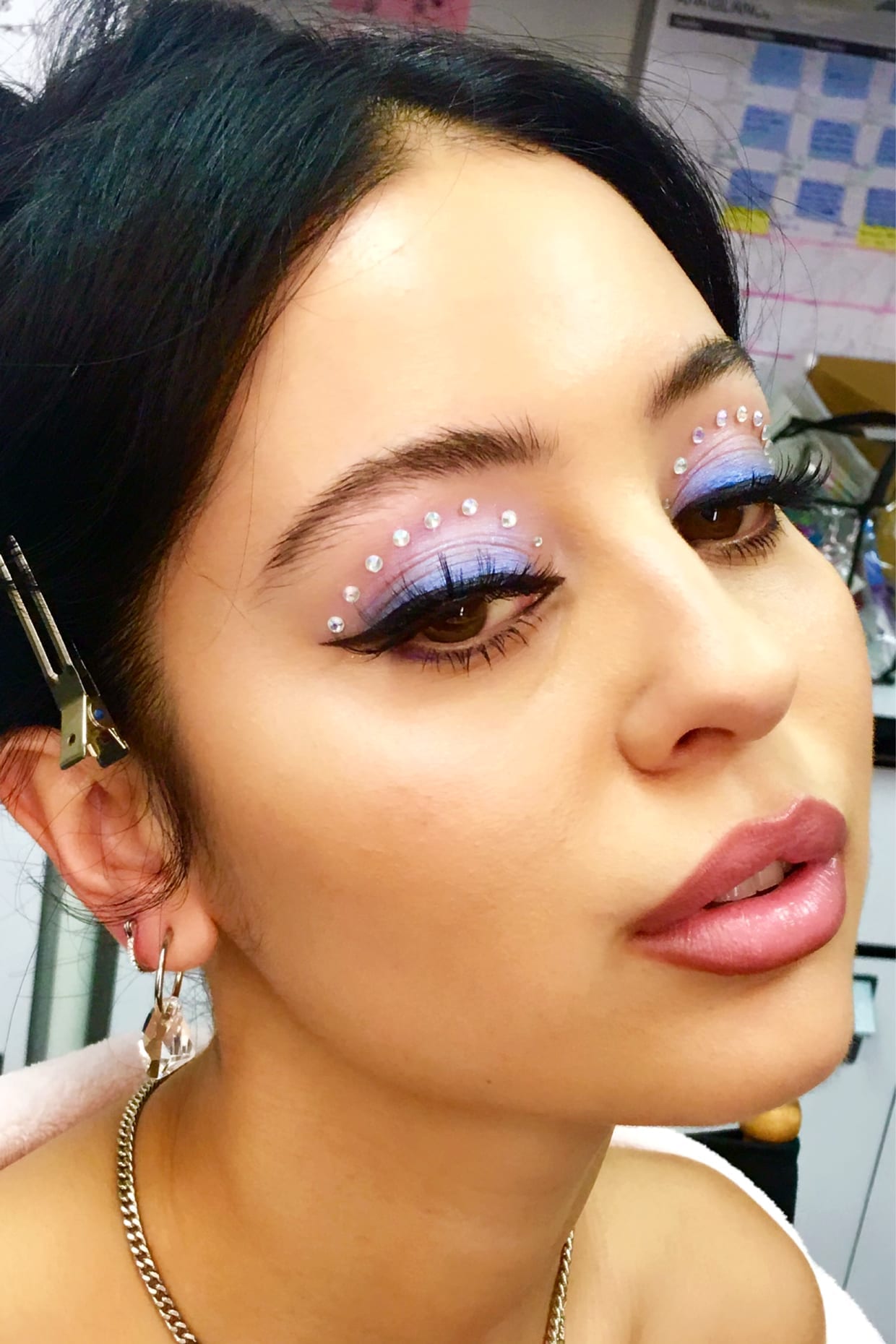 DD: Minimal. Show your date what you were born with. OR, if decorative and expressive makeup is your thing, adorn your eyes with some color or rhinestones or whatever you want, because then your date can take it or leave it if that’s who you are! Just remember that none of that matters as much as who you are on the inside. People are the most magnetic and beautiful when they are being themselves.

Q: I am sure lots of girls will use Euphoria-inspired makeup looks for Halloween. Have you already thought about your makeup?

DD: I’m always working on a film or TV project on Halloween, and so will be the case this year. I’m working on The Underground Railroad, directed by Barry Jenkins. It’s hard to dress up while I’m working because I hate being half-assed about it. This year I’m really just looking forward to seeing all the groups of people dressing up like the Euphoria girls.

Q: I loved Maddy’s look as Iris from Taxi Driver. What was your favorite Halloween look from high school or college?

DD: I’ve never been anything glam actually! I’m more of a Lexi when it comes to Halloween. I would totally be Bob Ross — I think that’s genius. But I would add a squirrel on my shoulder.

Get Ready for the Spooky Season with Nicole Faulkner, aka “Lipsticknick”

Our Favorite Makeup Artists for Every Gen Z Subculture